It wasn't supposed to be a big deal. I knew where I wanted to go. A spring look that is fresh and modern. But...
For the Quilt Along I knew I wanted the peachy pink fabric with circles of rose, tourquoise, orange, green and purple. Using peachy pinks/oranges for the backgrounds and the contrast as a purple wasn't coming. I realized the main fabric has too much happening. So I went greens and tourquoise with the focal fabric as the accent and it was lovely but it dawned on me the quilt for the guest room is pretty much aqua/tourquoise. So I dug deeper and found some yellow/pink and dull greens. Now I was getting it. This works for our room. I had hit an Amy Butler sale this summer as I had wanted that look for my 50's guest room. It was a very good sale so I got several different pieces. The hall needs a wall hanging and there are some leftovers that will work.
I had repinned my WIP in a better spot for photos and discovered the new camera needs batteries. 8>[ So I'll post my colour options tomorrow and hope I can remember the combos.
Posted by elle at 3:07 PM 3 comments:

Cheryl at Naptime Quilter is having a 6 week quilt along. It is a busy time and a bit of stress is hissssing at me. I do tend to start several new things when I'm feeling stretched. This adds to the stress no doubt but somehow it makes me feel better. ??? My rationalizing says I do need to do a spring quilt for our bedroom. I imagine the more challenging part in this project will be picking the fabrics but I always enjoy messing with my stash so that will definitely be relaxing. The original idea is shown in an old photo below. I shall mess about with fabric choices and post the many and then the edited few.
Posted by elle at 1:44 PM 1 comment: 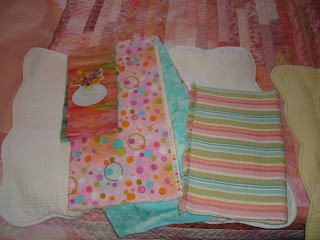 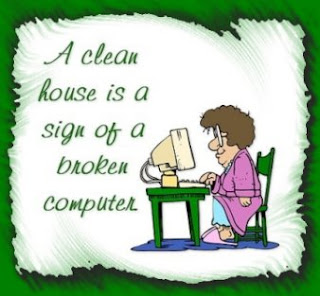 bath robe blogger. I do tend to do some blogging before I change and start the physical aspect of my day.
But I have mostly been on a binge! I luv books. I rarely have time for fiction anymore but I discovered the Sword of Truth series and my eyes are now slightly crossed. I also like good substantial books and these are all quite lengthy. I'm waiting for the library to bring in the concluding book and then I'll be trying to stay on my diet of non fiction. A most interesting concept was introduced into this fantasy world of wizards and magic, good and evil. Rather than stay with the traditions and formulas of "it has always been this way", there was a move toward 'creative magic'. It was more like taking what is; adding, subtracting, combining, rearranging, and re purposing the old tried and true. It has actually been quite boggling to my old brain. I keep being drawn back to the phrase, especially in conjunction with 'What if...' and it is kinda neat!
I am seeing very bald trees. Leaves dropped quite quickly and things are kinda bleary. We even had a good dump of snow that actually formed some snow banks before Thanksgiving. The snow has since dispersed which is good as there are always a few more things that need doing before winter really sets in.
Bad girl! I am always stalling. (procrastinating) But I really am trying to get the playroom somewhat organized for the doing. So I am attempting to get my mixed media supplies handy. The budget took a hit from the 'puter but I have also been getting some good coupons for Michaels that I think actually justify the drives to the city. I've laid in some major kits and I also left The Artist's Emporium with a very hot, limp piece of plastic. So I've been sorting bottles, brushes, beads, baubles, and other beauties into bins and boxes. Some of what I have envisioned will be too wet for the sewing room so I spent another day in the basement reorganizing and banishing non essentials. Then when the 3 day blizzard hits I, myself, will be swirling around making mini blizzards in my bedroom slippers and jammies 'cause nobody comes calling when the roads are blown in! 8^)
So I'm beginning once again and by golly, with a bigger understanding that I need to be Doing. That means keeping the clutter at bay and leaving things set up for a good beginning each day.
Bye for now and I anticipate being back on a daily basis once again. Blessings from Elle
Posted by elle at 7:33 AM 1 comment:

Labels: strategies, what if..., words

I can't believe it has been almost a month to the day! When my puter gets badly broken, it gets BADLY broken. I got 2 opinions and decided on the rebuild. I did say I'd just put a new phone modem in so that wasn't changed. Got it home and %~*+&*^# !!! A long holiday weekend, some gnashing of teeth and back to the shop. A $29 + tax modem, no labour, bless his heart and I'm good to go! Yipee, yahoo! But now I need to reacquaint with all the new things that were upgraded. Lost my addresses, but most else is here just a bit re figured. Ahh. Feels good to be back nibbling away at things with my mouse. Oooh, I have lots of things to catch up on!
Posted by elle at 7:52 PM No comments:

WELCOME TO MY PLACE 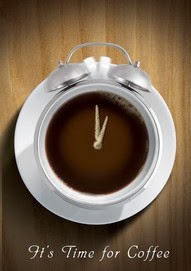 So glad you are having a peek! I'm always willing to stop and visit. Give a rap on the door at ellendacoop@gmail.com 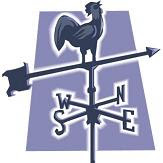